The shop is now stocked with sweet little 18″ doll dresses and outfits. I worked so, so hard on these and I’m so pleased with how they turned out.

Also in the shop; these cute little matryoshka dolls:

Reversible headbands are there:

AND I’ve marked a few items down in price!

I may have hit a great sewing milestone: I finally seem to be sewing what I actually wear instead of vintage inspired full party dresses that would gather dust in my closet. Since quitting teaching to stay at home with the kids and work when I can, my go-to wardrobe is leggings and tunics. This pairing is comfortable, easy and hides my trouble areas relatively well.

I wanted to make Victory Pattern’s Lola as soon as I laid eyes on it. Comfortable + stylish = win.

I had a lot of trouble finding a sturdy knit fabric that I liked. In the end I went with this sweatshirt fleece from fabric.com. It’s not my ideal choice but once it was put together I quite like it! 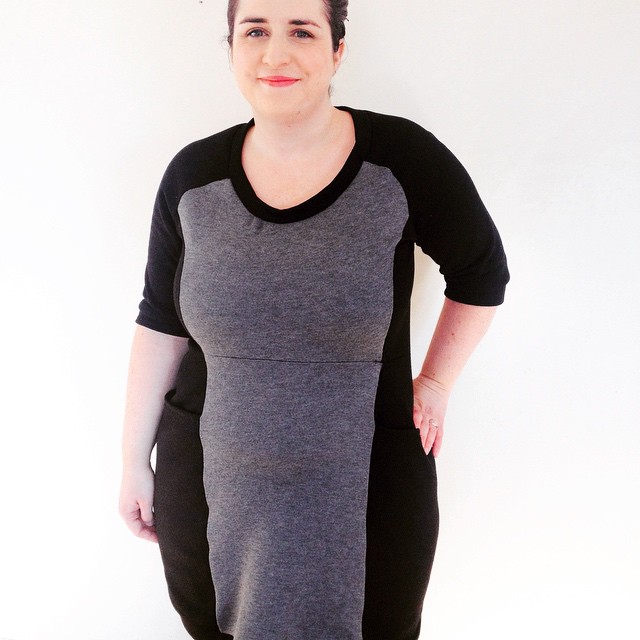 I thought the contrasting black side pieces would make a nice flattering silhouette. If I make another I would love to use some interlock or french terry with a nice print if I can locate one.

Once I had attached the bodice to the lower portion I slipped it on. The back was strangely bulky at the middle so I kind of eyeballed some adjustments and thankfully it worked out. 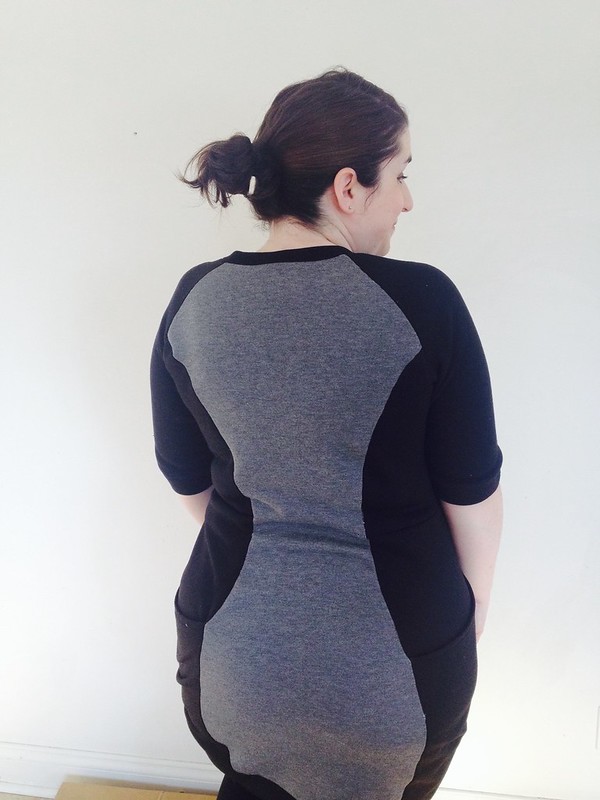 The only other issue I had was with the bands and cuffs. I didn’t have any ribbing that matched so I just used some of the black main fabric which wasn’t quite stretchy enough. I had to cut a larger hem band and I probably should have done the same for the neckband because there’s a bit of weird puckering there. I may give it another pass under a hot iron.

Overall, once the many pieces were cut it was pretty straightforward to put together. I can see it getting a lot of wear!

Chris really loved the orange Berroco Ultra Alpaca that I used for the kid’s Foxy hats so I ordered some more and made him an Earthen for Christmas. 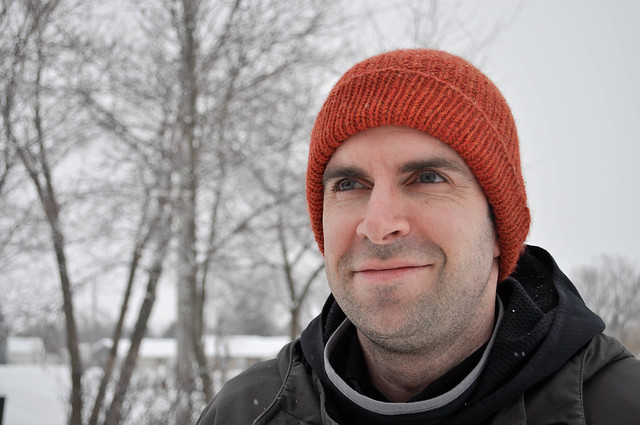 The stitch pattern would probably look nicer in a more semi-solid yarn but it’s a warm and cozy hat which is important when your ears are cold even on mild Spring days. 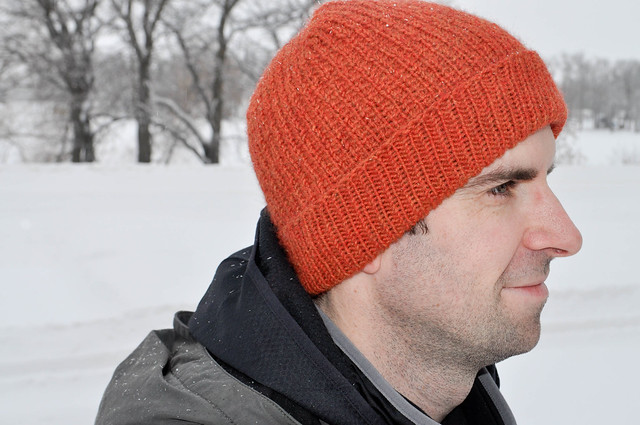 When I went to Edmonton to visit Erin I wanted something portable and straightforward to knit on my trip so I jumped on the Rikke bandwagon. 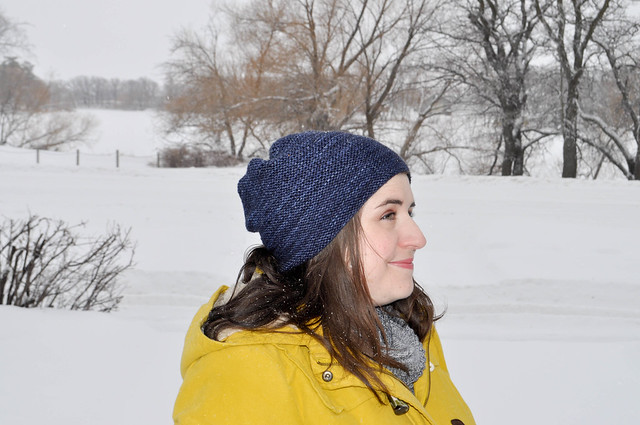 The yarn is some beautiful Madeline Tosh Vintage in Ink leftover from this sweater. 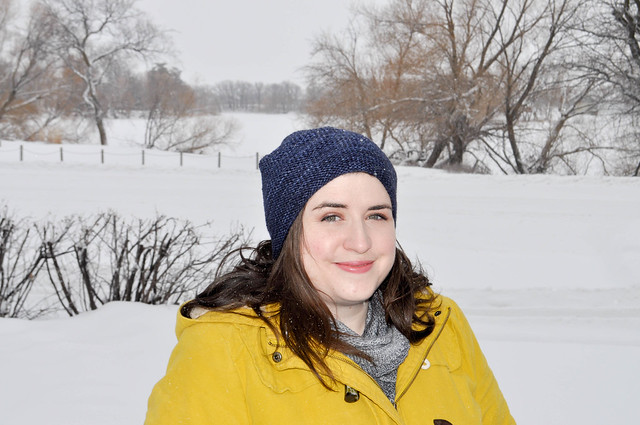 I was thinking of putting it aside for last-minute gifting needs but I don’t own any other slouchy hats and it turns out they’re really fun to wear!

I am so proud of the teeny pieces of doll clothing that I’ve been working on these past few weeks. I’ve been collecting wool felt, cotton lawn, lace, tiny buttons and ribbon. Many tiny shoes have been discarded for not being quite right and dress patterns have been tweaked and tweaked some more. Things are still in the works but I will have a few things ready for the first every Turtle Mountain Baby and Kids Expo at the Killarney School this coming Saturday, February 7th! Hope to see you there!

I’m an avid meal planner and trying to grocery shop without a solid idea of what I’m cooking makes me nervous. Improvisational chef I am not. This book is a great resource for quick meals and the recipes I’ve tried have all been really good. I thought the recipe for ham, swiss and chicken roulade looked promising but I didn’t like that the only seasoning on the chicken was salt and pepper and mustard was used as a dip. I’m not the biggest mustard fan so a marinade / glaze featuring dijon was much more appealing. I threw together a recipe and OMG it was really, really good. I think you could make this more budget-friendly by preparing one chicken breast for every two people and slicing it into impressive-looking wheels to serve. We had ours with bagged superfood salad, which I love. Here’s a recipe before I forget: 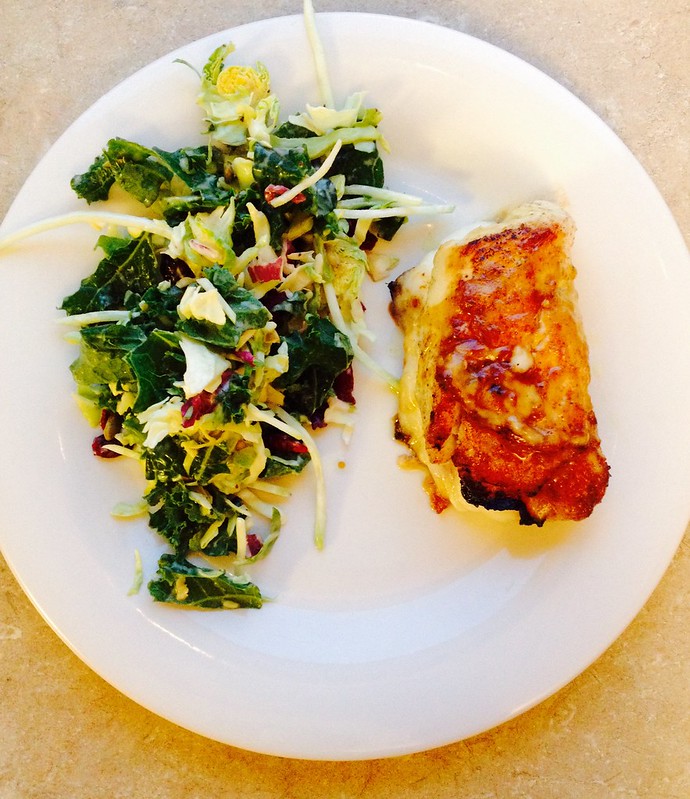 Sandwich the chicken breasts between waxed paper and pound them flat and even. Sprinkle both sides with salt and pepper and lay a slice of ham and a cheese slice on top.  Roll the chicken and skewer with toothpicks. Whisk the mustard, syrup, oil and hot sauce together. Pour 1/4 cup of marinade mixture into a separate bowl and reserve. Brush chicken on all sides liberally with the remaining marinade and refrigerate in a covered container for at least three hours. An hour before cooking time remove the chicken from fridge and let it sit until it reaches room temperature. 45 minutes before dinner time preheat the oven to 400 degrees and heat 2 tablespoons olive oil in an oven proof skillet over medium-high heat. Add chicken breasts and allow to brown on both sides. Once evenly browned, brush with remaining mustard marinade and bake for 20-25 minutes until cooked through.

My dearest friend Erin had her first baby in September and I finally got to visit them in Edmonton this past weekend. We had a great time baby cuddling, shopping, eating treats and playing a ton of board games. Not much has changed in the last twenty-three years of our relationship.

I had to squeeze in some knitting for baby Theda and I finished this little striped sweater with a couple of days to spare. 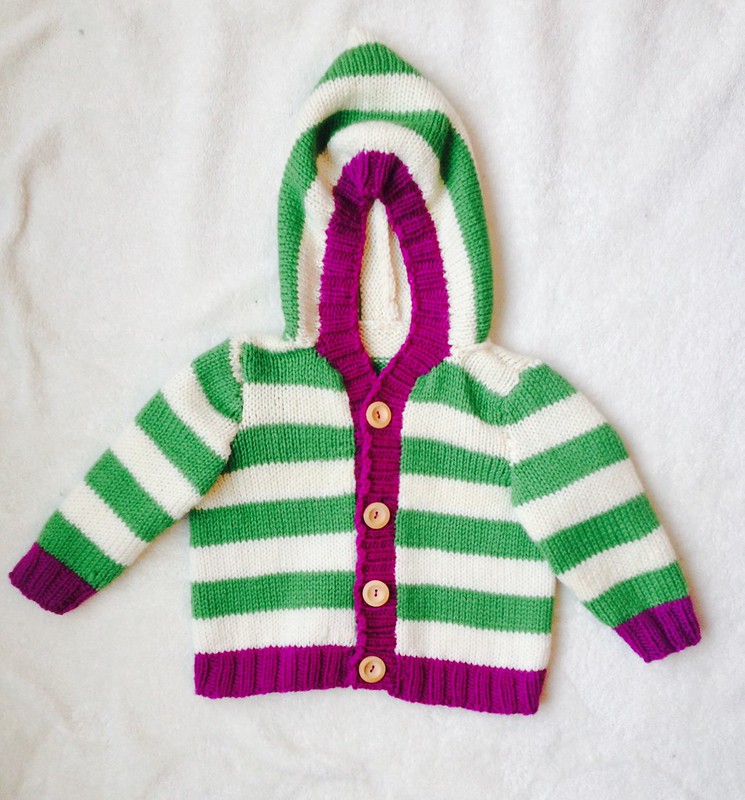 The pattern is from this book which I find really handy because I always have lots of Cascade 220 laying around from stocking making. I made the twelve month size so that she could hopefully wear it all next winter. She’s too tiny for it now so no modelled pics yet. I did get a photo of her in this cute little hat from the same book that I sent Erin before Theda was born. 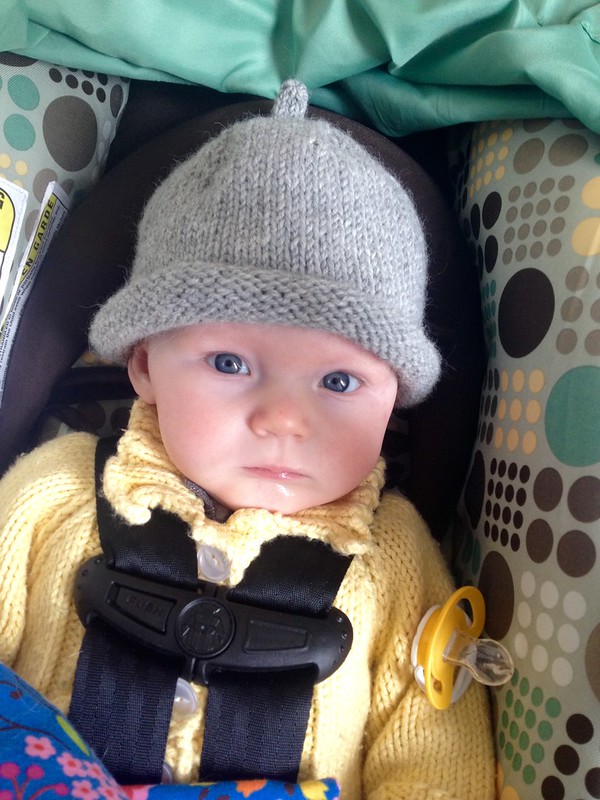 Cutest. I miss them already.

I haven’t knit myself a sweater in THREE YEARS! I guess I was frustrated by how little I wear the many sweaters I’ve made in the past. They were often too warm or too snug or not suited to what I actually wear day to day. I have a feel that this time it will be different! 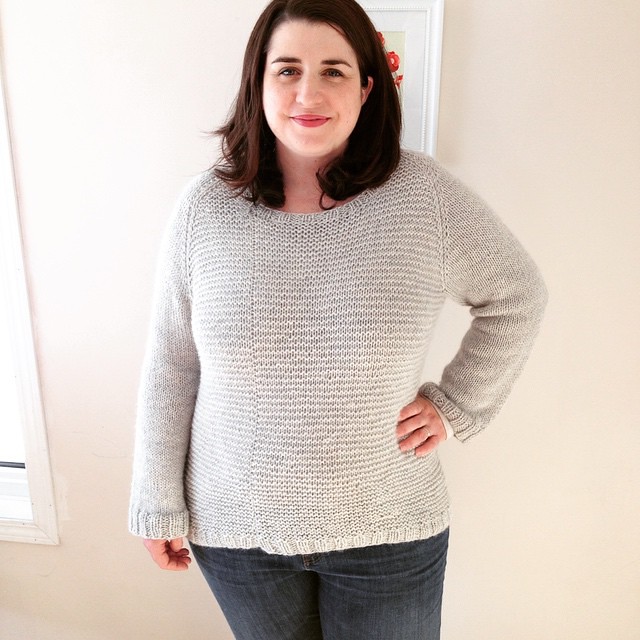 I’ve managed to wear this all day without getting annoyed with it and it is so cozy and soft! 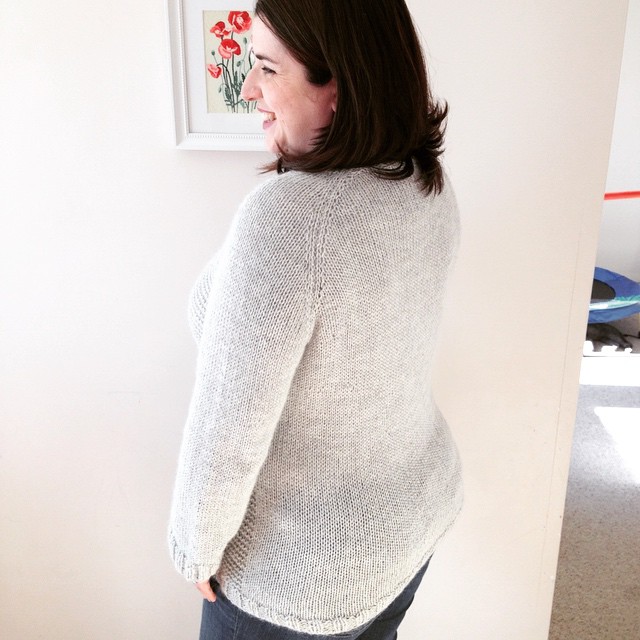 I did the garter stitch front that someone on Ravelry subbed and my only regret is that I didn’t think about the jog that was created from beginning in the round in the middle of the front. Aw well. I also added some length but it was still quite short when I bound off but it happily grew a lot with blocking.

I will be warm this winter!

Our families are far away and travel is expensive this time of year so we usually have quiet Christmases at home. I don’t mind at all EXCEPT it often means I spend days on end cooking since we’re not having any meals at other’s houses. I’m not willing to dial it back much even when it’s just the four of us. This year I tried to find a balance between cooking from scratch, making ahead and some packaged foods. It worked out amazingly well. I spent a totally reasonable amount of time in the kitchen and almost everything was amazing.

Last year we did a nice Italian meal and it was great I decided to repeat the same fancy cannelloni but I substituted the homemade tiramisu and garlic bread for some quality packaged ones. I also made a simple caesar salad. The cannelloni is amazing because it tastes gourmet but you can make the ragu way ahead of time and I use premade lasagna sheets from the grocery store. The only thing I wish I had done differently was to boil the lasagna sheets before wrapping the filling. Such a good meal I didn’t get a single photo either year.

I bought a fruit tray and put it out while we opened presents so no one would starve. The kids also took he liberty of stuffing their faces with chocolate from their stockings. Once our living room was good and messy I made some waffle batter (double or triple that recipe if you like tasty things) and I threw some frozen potato patties and breakfast sausage in the oven. While I waited for the waffle batter to sit I put lots of toppings on the table so we could choose whatever we wanted for waffles. There was bananas, sliced thawed from frozen strawberries, Nutella, peanut butter, jam, salted caramel sauce (thanks Erin!) and maple syrup. So good. So unphotographed. 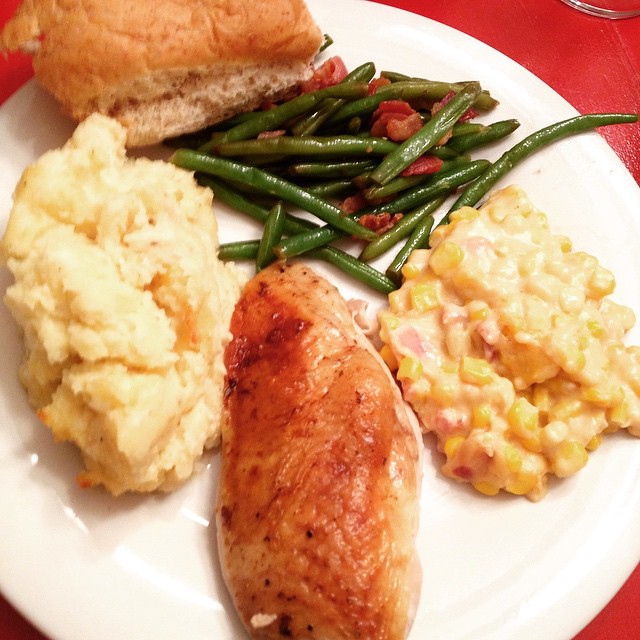 For the last few years we’ve done roast chicken instead of turkey because they’re smaller and I like the taste better. I love this recipe. I do wish we had bought a chicken that was bigger than four pounds so that we had leftovers. On Christmas Eve I made more mashed potatoes and corn casserole than anyone could ever eat and stuck them in the fridge pre-baking. The corn could make use a little cayenne? I also made the first green bean recipe here with frozen whole green beans and I bought frozen bake-yourself rolls but I didn’t take them out early enough so that was a bit of a bust. We luckily had some bakery rolls in the freezer.

For dessert I made this delicious maple-pecan pie ahead of time with my go-to pastry crust and froze it. 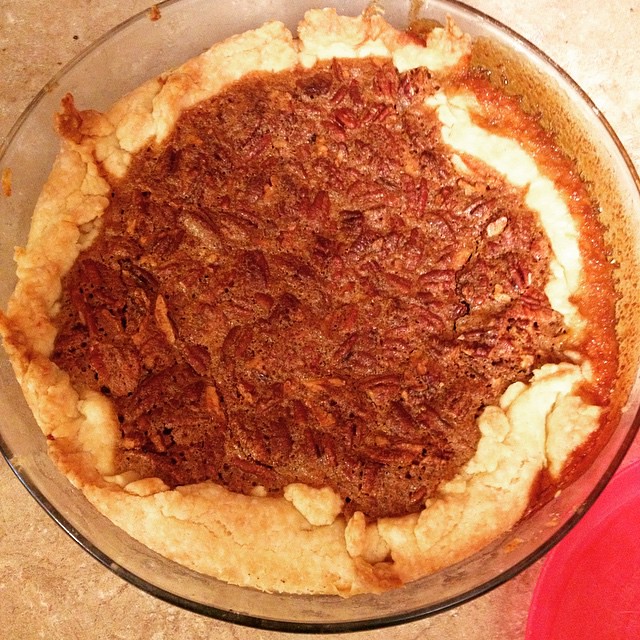 This I did photograph just to document how hilariously bad at I am at baking pie. It was so good though.

So there it is; the holiday foods I will be making from now to eternity.